Did you know that gemstones have hidden meanings? Throughout history, gemstones were common gifts or adornments thought to bring luck to their owners.

Aside from signifying your birthday month, precious stones also have a variety of health benefits. Some improve circulation while others may ward off evil spirits or bad energy.

To learn more about gemstone meanings, read our guide. Discover the benefits and rich history behind the most popular stones in jewelry.

Garnet is the January birthstone.

The story goes that garnet was one of the stones given to King Solomon. Noah used a garnet to create light on the ark. Egyptians even believed garnet should be inside tombs to light the way into the next life.

When most people think of garnets, they picture red stones. But garnet can come in a variety of different colors.

Today, garnets tie to lovers as the red type symbolizes passion and long-lasting love. Because of this, garnets are traditionally given as a second-anniversary present.

Amethyst is the February birthstone.

Amethyst necklaces were one treasure found in the tombs of ancient Egyptians. It’s thought that this stone was once used as currency.

Ancient Greeks believed amethyst had the ability to protect against intoxication. As such, it’s often used to help those struggling with substance abuse and to stop harmful habits.

Amethyst is also used as a meditation aid and to remove energy blockages.

Diamond is the April birthstone.

This popular stone is the mineral form of carbon. Throughout history, diamonds have been praised for their clarity and brilliance as well as their hardness.

Many believed these precious stones had healing powers and were sometimes used in the Dark Ages for medical aid.

Diamonds are symbols of eternal love and faithfulness.

The use of diamonds in wedding rings is somewhat recent. In 1947, De Beers commissioned an advertising agency to create the famous slogan “A diamond is forever”. This created the idea that diamonds were the only choice for an engagement ring.

Emerald is the birthstone of May.

The oldest discovered emeralds are from Cleopatra’s mines. They also appeared in royal dynasties in the Middle East. Emeralds were one of many precious stones used in the Taj Mahal.

See also  How to clean jewelry Step by Step

The green color associated with emeralds comes from the application of oils. Every few years the oils may be reapplied to bring out the beauty of this stone.

This stone is often used for physical healing and it is also said that emeralds can help people with broken hearts recover.

Ruby is the July birthstone.

Like emeralds, rubies often appear in the crowns and jewelry of kings and queens throughout history. In Sanskrit, the word for ruby means “king of precious stones”.

Ruby is a powerful healing stone often used for healing the heart in both a physical and emotional sense. Many cultures believed that rubies linked to the power of life because of their deep, blood red color.

There are many gemstone benefits tied to health and emotional well being. In fact, ruby is one of the most powerful healing stones.

Aquamarine is the birthstone of March.

The name comes from two Latin words meaning “water” and “of the sea”. It’s easy to see why considering the beautiful blue color of this stone. Aquamarine is a member of the beryl family.

People that wear aquamarine jewelry believe it increases foresight and intelligence. An old legend says that sailors would use this stone to stop seasickness.

Sapphire is the birthstone of September.

Blue is the most common color for sapphires but they can also be yellow, pink, and white among other colors.

Ancient Egyptians thought clear sapphires had a connection to the eye of Horus. Ancient Greeks thought sapphires connected to Apollo.

Sapphires are often used in crowns and tiaras. The blue sapphire helps with depression and feelings of sorrow or guilt. It is also said to help with anxiety or physical pains.

Sapphires have already made an appearance in runway shows for this year. Combining clusters of natural stones is one of the trends for 2019 and you can be a real fashionista by learning how to accessorize your look.

Opal is one of the birthstones for October.

The word Opal is a Sanskrit word that means “stone”. Most consider opal a good luck stone, but a few think it brings misfortune to anyone not born in October.

In ancient times many considered opals extremely lucky. Ancient Greeks thought opals had the power to lend powers of prophecy and according to Arabian legend, opals came to Earth on bolts of lightning.

So is the opal meaning one of good luck or bad luck? Many agree the bad luck myth stems from a misinterpreted novel by Sir Walter Scott. In the novel, a character dies when a drop of holy water falls onto her opal ring.

Opal has one of the most complex stone meanings. Yet despite the myths, it is often used in realigning your energy and emotions.

Onyx comes from a Greek word meaning fingernail. The myth goes that Cupid clipped Venus’ fingernails and cast them on the beaches after which they became onyx.

Onyx jewelry was often worn by Queen Victoria while she was mourning. Since then, the onyx meaning became tied to the process of healing after bereavement. This stone can also help with fixing bad habits or appearing humble and apologetic in court.

Most onyx isn’t black at all, but brownish with bands. Today, the majority of onyx is dyed and black remains a popular color choice.

The history behind our favorite stones goes back thousands of years, and certain gems will never go out of style. Now that you know various gemstone meanings, you can start to use them for healing purposes.

Even if you don’t believe in the medicinal purples of these stones, you’ve learned about the history. So the next time you put on a piece of jewelry, you’ll know more about the language of stones and their meanings.

Do you want to find more information on health and wellness topics? Check out our wellness articles for more stories and advice.

3 Golden Tips for How to Clean Jewelry 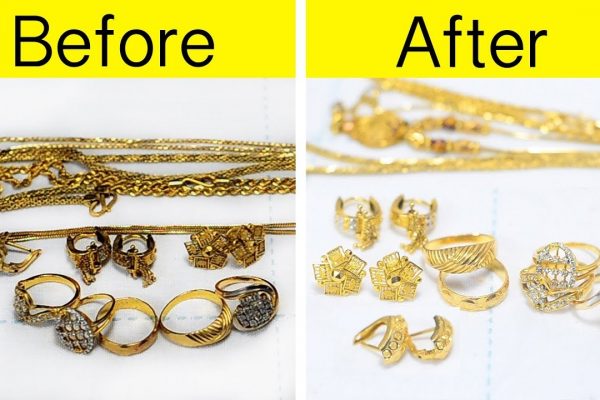 How to clean jewelry Step by Step